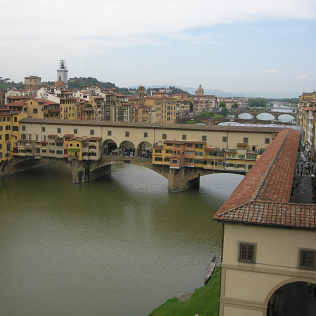 The Vasari Corridor takes its name from its creator, Giorgio Vasari, who built it just in 5 months, in 1565. The Grand Duke Cosimo I commissioned it on the occasion of his son’s marriage with Joanna of Austria.

The Corridor is an elevated path that links Palazzo Vecchio and Palazzo Pitti, seat of the court. It passes through the Uffizi Gallery and on the Ponte Vecchio. The Corridor was necessary to the member of the court to move freely, distant from people and dangers. It has also an opening on the church of Santa Felicita, from which the Grand Duke’s family could listen to the Mass.

At that time, on the Ponte Vecchio, there was the meat market. It was moved and the goldsmiths – that are still on the bridge – arrived, because of the bad smells of the meat that rose to the Corridor.

During the World War II – when Nazis blew up all the bridges in Florence except the Ponte Vecchio – the Corridor was the only way to go from North to South in town, and even partisans used it. Apparently the oldest bridge was spared – but not the areas surrounding it – because Hitler had been enchanted by a visit to the Vasari Corridor.

Nowadays the Corridor hosts the biggest collection of self-portrait in the world and it is part of the Uffizi Gallery. Visitors itinerary ends in Boboli Gardens, near the Grotta del Buontalenti.