The Arnolfo’s tower of Palazzo Vecchio 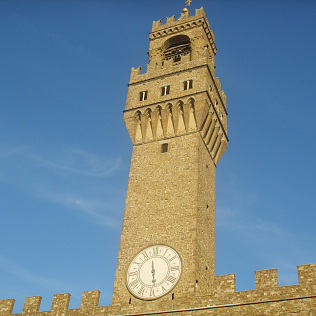 The tower of Palazzo Vecchio takes its name from the architect Arnolfo di Cambio – an important personality in the Medieval Florence – who is considered its author. The tower is with no doubt one of the symbols of the town: it towers on the other buildings, with its 95 mt. of height.

The tower was built at the beginning of the 14th century, with the first nucleus of the palace. In the same period, the ‘Government of the First People’ dictated to the unruly Florentine families to reduce the height of their towers. The function of Arnolfo’s tower was also a defence one: from the top it was possible to see enemies and to protect Government’s exponents.

The lower part of the tower – incorporated in the palace – rests on the foundations of a more ancient tower. The higher part is the result of a very original and bold architectural project, because it juts out over the underlying structures.

Inside the tower, its 233 steps bring to the top, where there are two bell chambers and the big weathervane. There is also a little prison cell, called the Alberghetto, in which Cosimo il Vecchio – before the exile – and Savonarola – before his execution in the square – were imprisoned.

The clock has still the mechanism made in 1667.