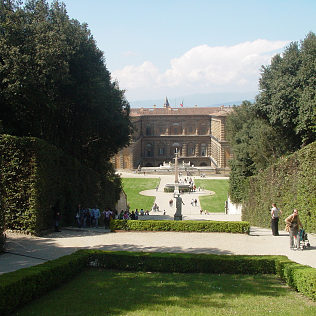 The Boboli Gardens are an historical park in Florence. It is one of the first and most important Italian gardens, that inspired many European courts.

The park extends right behind Palazzo Pitti, up to Forte Belvedere. It was built between the 15th and the 19th centuries. It is a proper open air museum, that hosts ancient and modern sculptures.

The garden is split in half by the viottolone, from which many paths start. They lead to fountains, small temples, grottoes, small lakes. Some important buildings are located in the park: the Kaffehaus, the Limonaia and the Casino del Cavaliere. It is important to remember the Grotta del Buontalenti, constituted by three rooms: it is one the most particular and original architectural examples in Florence. The garden is rich of perspective views, panoramic and “scenographic” points.

The Pitti family bought the first plots in that area during the 14th century. The 16th century is the period of the big extensions and improvement: in this period the great amphiteatre – that hosts the only one Egyptian obelisk – was built.

In the second half of the 18th century – during the reign of Leopoldo II – the park was partially opened to the public. It is a World Heritage Site, listed by the Unesco.