The Room of the Maps 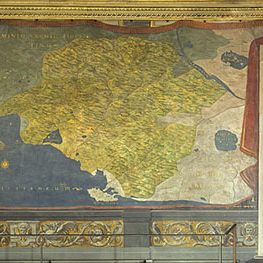 The room 16 of the Uffizi Gallery is the so-called Room of the Maps. Originally, this space was a loggia, which was subsequently closed.

The room was set up for Cardinal and Grand Duke Ferdinando I de\' Medici (1549 - 1609), who wanted a space in which he could exhibit the Uffizi collection of scientific instruments.

The loggia was closed, and then it was frescoed by Ludovico Buti: he reproduced some maps, which represented the old Florentine Domain, the Island of Elba and the State of Siena. Buti based his work on the designs by Stefano Bonsignori, a cartographer.

For the ceiling, Ferdinand I adapted some paintings by Jacopo Zucchi, with mythological subjects. Previously, these works were in his residence in Rome, Villa Medici.

In this Uffizi room there are no more scientific instruments. Currently, in this space we can admire some Renaissance paintings by Hans Memling and Rogier van der Weyden, and even some ancient artifacts.