The Cabinet of Miniatures 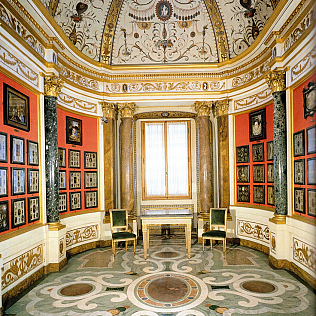 Room 24, that is at the end of the second Corridor, at the second floor of the Gallery, is a small room, which is called Cabinet of Miniatures. The room has an ellipsoidal plan, and it can be seen looking out from the outside.

Grand Duke Ferdinando I de \'Medici had it set up after the wedding - in the second half of the sixteenth century - with Christina of Lorraine, who brought as a dowry, from France to Florence, a collection of gems and precious stones.

In the past it was home to many collections – many of which today are at the Museo degli Argenti in Pitti Palace – bronzes, golds, jewelry, gems, precious stones, Mexicans objects. Today there are about four hundred miniatures, from various periods and schools. These are portraits of the Medici family representatives, especially collected by Cardinal Leopoldo.

The present aspect and the oval shape of the hall date back to a series of works done in the eighteenth century by the Florentine architect Zanobi del Rosso, at the behest of Peter Leopold.

A little gem in the path of the Gallery: a richly decorated room, with grotesque ceilings and the floor covered with colored marble, creating a wonderful setting for small works displayed on the walls.