The 1900s between Caravaggio and Marx: Gianfranco Ferroni at the Uffizi 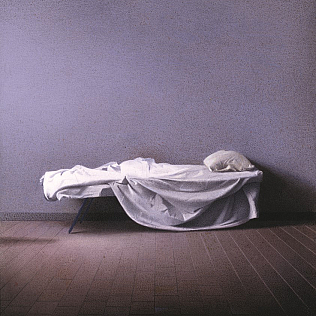 On May 15th “La fabbrica e le stanze domestiche” (The factory and the domestic rooms) has been inaugurated. It is the new exhibition at the Sala delle Reali Poste, dedicated to the painter Gianfranco Ferroni (1927-2001). The occasion is the donation to the Gallery of the Tuscan painter self-portrait. The exhibition title refers to the double great inspirations of his works.

The painter passed through different periods in his career, that we can divide in two parts. They are characterized by the different – but always fundamental – role played by the light. Caravaggio is very important for Ferroni, who honored him various times: an almost literal quote of The Calling of St Matthew is present at the Uffizi exhibition. Ferroni\'s work is different because there is nobody in it, as an empty stage, without actors.

Light and dark make strong contrasts in his first artistic phase, in the wake of Caravaggio’s chiaroscuro. This phase coincides with the great political commitment: Ferroni was a communist and he admired very much the working class, that – according to his Marxist ideology – he considered the most advanced class. He leaved the PCI (Italian Communist Party) in 1956, after the repression in Hungary.

The work donated to the Uffizi will be part of the self-portraits collection in the Vasari Corridor. It is a big oil on canvas, made in 1968, called No Resurrection. It is a secular deposition, inspired by the Lamentation of Christ by Mantegna, but realized in a very original way and a with a unique composition. This painting represents a period of changes in Ferroni’s career. 1968 was a very important year for Western culture and society: protests arrived at the Venice Biennale, where Ferroni decided to display his works back-to-front.

In the self-portrait the artist is supine on an improvised bed: the very thin body represents the Holocaust and the big human tragedies of his century, but also the lack of hope for the future.

After his ideological crisis, Ferroni changed his style of painting: from the ’70s it became more poetic, absorbed and introspective. This was the period of the domestic rooms, of the personal reflection. The artist’s soul found some quiet, that we can see in a different, tenuous light.

The exhibition will be open until July 5th: it is a very big occasion to admire the new painting of the Uffizi Gallery and to discover this great Italian painter, that represents art and society of the ’900s, with its turmoil.