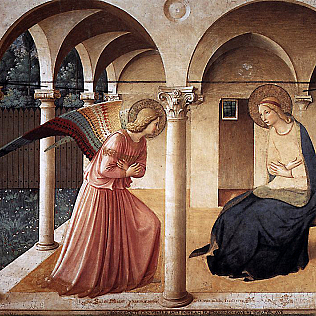 San Marco Museum is located inside an ancient Dominican monastery of Florence and houses the largest collection in the world of paintings by Fra Angelico. The charming architectural complex, masterpiece of functionality, harmony and elegance, was built between 1438 and 1444 by will of Cosimo the Elder of the Medici family, on a project of the architect Michelozzo. During the Florentine Humanism, San Marco monastery was one of the most important centres, thanks to the adjacent library too, once housing Greek and Latin books. Head of the monastery at the end of the 15th century was Girolamo Savonarola, the preacher who inspired the Florentine Republic, then condemned as an heretic and executed in Piazza della Signoria. But its fame has always been due to the magnificent cycle of frescoes realized by the painter-monk Fra Angelico. His extraordinary painting, the elegance and the delicacy of his drawing, the moving religiosity of his works makes him one of the greatest masters of the Florentine Renaissance. His panel-paintings are displayed in the Hospice Hall and the Large Refectory, but the big cycle of frescoes starts in the cloister and the Chapter House, till the upper floor along the corridor and inside the cells of the dormitory. The rooms of the monastery host also works by Domenico Del Ghirlandaio, as the Last Supper in the Small Refectory, works by Benozzo Gozzoli and many others of the San Marco School. The State Museum was opened in 1869.