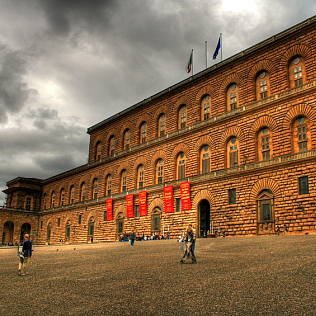 Palatina Gallery of Florence is so called because it is located in the "Palazzo", the imposing Pitti Palace, royal residence of the Medici, of the Lorraine and finally of the Savoy, Kings of Italy. At the beginning of the 19th century the Lorraine Grand Dukes displayed, according to principles and decorations of a princely official gallery, the huge collection of paintings collected by Medici family in the previous centuries and then enlarged thanks to legacies and acquisitions. The museum opened to visitors in 1828. Immerse yourself in this marvellous palace, where monumental royal apartments are joined to this rare and precious gallery, where paintings are arranged in sumptuous rooms decorated with baroque stuccoes and frescoes. The Gallery hosts the most important works of Raphael, as Madonna of the Grand Duke and Portraits of Agnolo Doni and Maddalena Strozzi, along with a rich group of Venetian works, such as many masterpieces by Titian, for example Concert and Portrait of Pietro Aretino. It houses works by the main Italian and European artists of the 16th and 17th centuries, such as Andrea del Sarto, Rosso Fiorentino, Pontormo, Bronzino, Tintoretto, Veronese, Caravaggio, Rubens, Van Dyck, Murillo and Ribera.