The Battle of San Romano by Paolo Uccello: a masterpiece of perspective shared by three great European museums 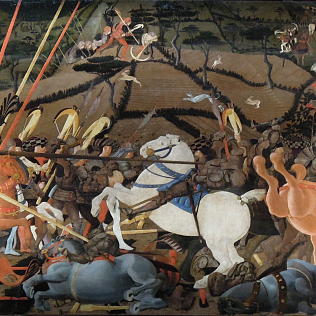 The Battle of San Romano is the most famous work by Paolo Uccello (1397-1475). He was a pioneer of the perspective: he was obsessed by the study of reproduction of things according to difficult or almost impossible perspectives. This characteristic puts his art in contact with the Renaissance, but he was also still inside the spirit of the International Gothic style. Uccello followed a personal artistic way.

The artwork was made according to the perspectiva naturalis, in which there are various vanishing points: thanks to this kind of perspective, the artist could separate the foreground – where the battle takes place and many elements are depicted foreshortened – from the background. Here there are hunting scenes and characters that have unreal proportions. The attention for the details of armors and horses, the fairy-tale atmosphere are part of the late-Gothic style of the work. The presence of a lot of details reminds the tapestry style.

The event depicted in the panels is a 1432 important battle, in which the Florentines fought against the Sieneses, that were allied with Milan and Lucca. The Florentines – who were losing in a first time – won the battle thanks to the arrive of the reinforcement.

In 1438, Lionardo Bartolini Salimbeni, a rich man that had taken part to the campaign, commissioned the artwork. In about 1484, Lorenzo the Magnificent saw the three panels and fell in love with them: so he bought and displayed them at the Medici Palace. When the family sold the building to the Riccardi family, the Battle arrived at the Uffizi.

However, in the 19th century, the three panels were considered too similar to each other: for this reason only the best-preserved one is still at the Uffizi, while the others have been sold to the National Gallery and to the Louvre Museum. Nowadays these three great European museums share this important artwork.