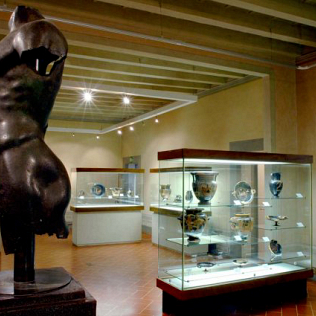 The Archaeological Musem in Florence is one of the most important archaeological museums in Italy, renowned for a very significant Etruscan collection and an extraordinary Egyptian section, the second one in Italy (the first is in Turin). In the 19th century a French-Tuscan expedition discovered preciuos Egyptian works that were moved half to the Louvre, and half to the newborn Egyptian Museum in Florence. Few years later, the Etruscan museum was opened in the same location. The 2 adjacent museums, both started with the Medici and Lorraine collections and then developed and increased, were gathered together in the current location, in Santissima Annunziata Square and inaugurated in 1880 at the presence of the Savoy Royal Family. The Egyptian section displays works from Prehistory to the Copt Era: steles, pottery, small bronzes, fabrics and statues and many other works as a military chariot (18th Dynasty), a pillar from the tomb of Sety I, the “square lip” faience goblet, the portrait of a lady from Fayum. The Etruscan section is composed by a huge collection of cinerary urns, sarcophagi, stone and bronze sculptures, small bronzes, home tools and pottery: big bronzes as the Arezzo Chimera, the “Arringatore” (Orator) and the Minerva; funenary sculptures as the stone Mater Matuta, the terracotta Sarcophagus of Larthia Seianthi, the painted marble Sarcophagus of the Amazons. The Greek-Roman section inlcudes important marbles and bronzes, along with a big collecion of Greek painted pottery, but the real gem of the museum is an Attic black-figures crater called “François Vase”. A new section ha recently been added, housing Etruscan and Roman precious stones, gems, cameos and jewellery.