We Must Make Haste! Marche 2016 - 2017: Treasures Rescued and Treasures still to Rescue. A new exhibition at the Uffizi Gallery 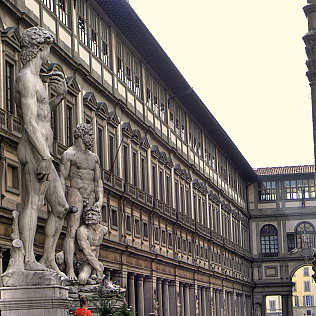 A new exhibition was inaugurated on March 28, 2017 at the Uffizi Gallery. It is titled ″We Must Make Haste! Treasures Rescued and Treasures still to Rescue″ and presents a selection of works from museums, churches and palaces of the southern Marche, Italian region recently hit by an earthquake. The quake rendered uninhabitable locations where such works were kept for a long time, many of them from their origin. With this event, the Uffizi give a solidarity contribution, donating to the reconstruction in the Marche one euro for each ticket. For visitors, this exhibition is a great opportunity to see, away from their usual locations, some wonderful works.

The aim of the exhibition ″We Must Make Haste!″ is to raise awareness among visitors, reminding everyone of the urgent need to save a valuable part of the Italian artistic heritage. The reconstruction will, however, require many years.

What works are exhibited? Some painting masterpieces of the 15th and 16th century, such as the altarpiece depicting the Annunciation and the Pietà, from the Museum of Camerino, by Giovanni Angelo d′Antonio of Bolognola; the panel with the Madonna and Child with Saints Vittore, Eustace, Andrew and Cristanziano by Cola dell′Amatrice, from the San Vittore church in Ascoli Piceno; the Saint Martin Death by Simone de Magistris; The Vision of Saint Filippo Neri by Giambattista Tiepolo. There are also important goldsmithing works, and three bells recovered from the collapse of the bell towers (from the church of Carpignano castle, near San Severino, the church of San Francesco in Arquata del Tronto and the Civica Tower of the same town).

The itinerary is closed by an exceptional work: the autograph manuscript of the most famous poem by Giacomo Leopardi, the Infinite, from the Museum of Visso.