The mystery of Leonardo\'s Annunciation: mistakes or virtuosities? 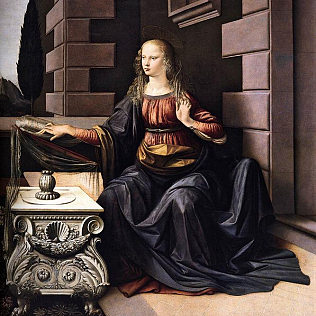 The Annunciation is one of the works by Leonardo at the Uffizi Gallery. The painting is thought to be by the young artist. We do not know much about the origin of this painting, that in the past was attributed to Domenico Ghirlandaio.

Some doubts about the paternity were due to some mistakes, above all one very significative: an error of perspective. It is very difficult for us to think that Leonardo could make so big mistake! Which mistake are we talking about?

In the painting he pictured the Virgin Mary, as she is surprised by the arriving of the angel – while she is reading – in a garden. The position of her bookrest, where she lays her right hand, makes her to assume an unnatural position. If we look at the painting from a central point of view, her arm seems to be too long and dislocated in some points.

Some academics tried to attribute a so evident imperfection to the inexperience of the young artist. However, things are different. As we have told above, the arm of the woman seems unnatural if we look at it from a central position, in front of the painting. From an idea by Carlo Pedretti, Antonio Natali – the Uffizi director – supposed that originally the painting has been conceived to be observed from another point of view. If we look at it from another point, on the right side and a little from below, we can see a normal arm, perfectly placed. Also the angel Gabriel, that could seem too unbalanced, takes a more natural position.

So we are not talking about a mistake but about an example of anamorphosis. What is anamorphosis? It is a kind of optical illusion: an object is pictured on a plane in a distorted way, but if we look at it from a particular point of view it will become “normal”. We know – from some sketches – that Leonardo studied this technique, used by other artists of Renaissance. One the most famous examples in history of art of this technique is The Ambassadors by Hans Holbein the Younger.

The so called mistake in Leonardo’s Annunciation is a proof of his important studies and mastery. We have to remember that Leonardo was very interested in anatomy and reproduction of natural elements, that we can notice also in this painting. The garden in which the scene takes place displays several botanical species, that are represented according to an aerial perspective. This perspective tries to reproduce human sight, gradually obstruct by atmospheric dust. It forewarns the sfumato, the famous Leonardo’s technique.

Even the angel’s wings display an accurate study of the anatomy of some birds. Leonardo represents them while they are closing down. Drapery reproduces perfectly the weight lowering on the grass.

Leonardo’s painting proves his talent and precision… did we need some proof of that? It also gives us some useful elements about its original position, nowadays unknown. Meanwhile, we can admire this wonderful painting at the Uffizi Gallery… and we can maybe try to observe it from the point of view conceived by the artist…