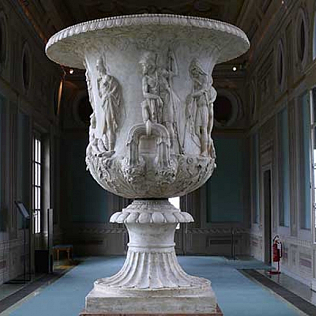 The Medici Vase is a marble krater, sculpted in Athens in the 1st century BC. The vase is over a meter and a half and has a bell shape.

The artwork was restored in 2017. The researchers revealed its secrets. Originally it was colored in blue, red and gold: its candid appearance is due to the action of time.

The Medici Vase was found in Rome in the 16th century, broken in a thousand pieces. Studies carried out during the restoration have shown, however, that the materials that make up the work are original at 90%.

The vase arrived in Rome to embellish the garden of some family of the first imperial period. The frieze decorating the walls of the jar is mysterious.

It represents a mythological scene: the Greeks in Delphi, probably before leaving for the Trojan War. Among the characters, Ifigenia is also represented: her presence is really unusual and probably the vase conceals an initiatic meaning, only understandable to a few.